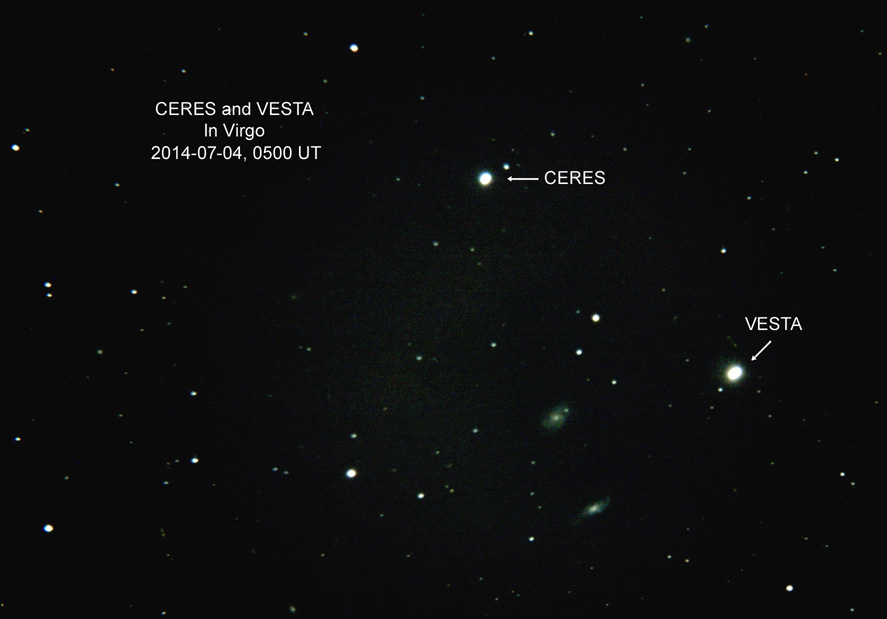 The image depicted here shows the asteroids Ceres and Vesta as they appeared in the constellation Virgo on July 4, 2014. Ceres is at magnitude 8.5 and Vesta is 7.2.  On the date of this image they were approximately 10 arcminutes apart.  Although they look close together they are actually about 74 million kms apart with Ceres in the background.  This is why Ceres might appear slightly fainter.  Ceres, with a diameter of about 940 kms, is actually twice as large as Vesta.

You might notice that the asteroids appear slightly elongated in this image (moving from upper right to lower left).  This is due to the movement of the bodies during the course of the 30 minutes it took to acquire the stack of images that make up this final picture.  Vesta is moving faster relative to Ceres and might appear slight more elongated.

Invisible in this image is NASA’s Dawn spacecraft having just completed it’s 2011-2012 visit to Vesta and is on course to it’s mapping project of Ceres.  Dawn is scheduled to arrive at Ceres in 2015.