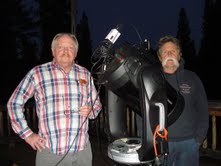 The RECON was poised and prepared for our Mikhailov campaign last Thursday morning just after midnight.  From Fall River, California, to Gardnerville, Nevada, 11 inch telescope were all pointed to the target star field high in the southern sky.  Shown to the right are Warren and Red all set up on Portola, California.

Unfortunately, reports came in early from Gardnerville and Carson City that they were clouded out the entire evening.  Just as the event window opened, clouds from the same system reached Reno and Portola.  However, in the northern part of the network, the skies held and successful recordings were acquired by Fall River, Susanville, Greenville, and Quincy.

Given that predictions placed the shadows path in Carson City and Gardnerville, the weather got the best of this campaign effort.  However, in TNO occultation events (which we are practicing for) uncertainties will be greater and if the event had occurred in the northern part of the network, we would have captured it.  As with all ground based astronomy, we are always dependent upon the weather!

Clouds or no clouds, great job to all who were able to participate in this campaign!