On 2016, August 13 at 06:30 UT, main belt asteroid (19) Fortuna occulted the star TYC 5780-01169-1 in the constellation Aquarius. Four RECON teams and two other observers recorded the event. A total of five teams actually observed an occultation and one team observed a miss. Observing a miss can be just as important as observing an occultation because misses help define the size of the asteroid. For a more comprehensive overview about the data analysis process for main belt asteroid occultations, see Tony George’s blog post from January, 2016.

Here is the path for the event, which passed over the northern part of the RECON network. Even if you don’t have access to the Occult Watcher program, occultation announcements and maps such as this can be found at the asteroid occultation website. 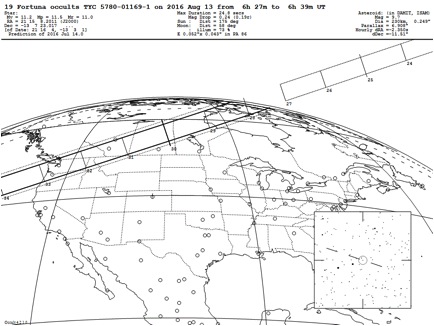 Here are light curves from the three RECON teams that recorded an occultation. Note that the horizontal and vertical scales on each of these light curves are different. 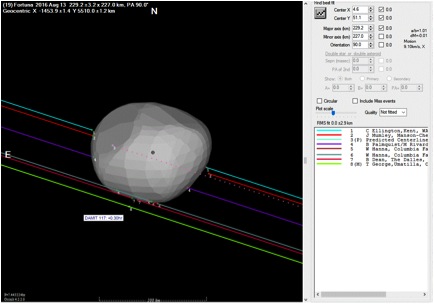 Click on the image above for a higher resolution view of the plot.

Main belt asteroid occultations are a great way to train new RECON participants in occultation science. One of the main reasons for this is that you can often see the target star and the asteroid. So even if your site does not record an occultation, you can still observe the dynamic nature of the Solar System by watching the asteroid move towards and then away from the target star.

Credits: We give a big “Thank You” to Tony George for generating and extracting precise timing information from our light curves.