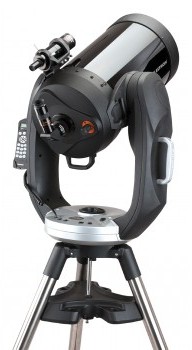 We have chosen the Celestron CPC1100 telescope for RECON.  This is a computer controlled telescope that makes it easy to explore the sky and find just about anything.  Setting up the telescope involves setting the telescope-fork assembly on its tripod.  This is best done with two people since it weighs 65 lbs.  You then attach the two parts with three bolts and it’s ready to start.

The original prototype for this project was a NexStar 11GPS, also by Celestron. The CPC1100 has some nice new features in the redesigned tripod that make setup even easier.  The mounting bolts are now captive so you can’t lose them in the dark and they are always ready to go.  There is a built-in bubble level for helping getting it setup.  The leg spreader is much more robust and harder to break and it doubles as an accessory stand.  The strap for holding the legs together while folded now has a quick release clip.

The telescope itself is more sleek in its design but time will tell if it can hold up to lots of nights of use.  The old one is really good in this respect and was used as the basis of the selection.  One item is clearly poorly conceived on the new model and that’s the power connection.  Some team members are already reporting problems with the power being disconnected.  Upon closer examination, the threaded catch that should hold the cable in place has nothing to hold on to.  If you look close, the threads on the power port on the base do not extend out far enough for the catch to take hold.  As a result, the connector just wiggles in place leaving you prone to a power disruption.  This will need to be fixed and some of our team members have already shared ideas for how to do so.

Everyone is surely excited at having this new piece of equipment to work with.  There will be detailed training on this telescope as well as its care and maintenance at the workshop in April 2013.  In the meantime, here are a couple of important tips.  First, never ever touch the glass corrector plate on the front end of the telescope.  If something happens that requires cleaning or other attention, it is far better to report the issue and wait for more instructions. One of the absolute worst things you can do to optics is to attempt to clean it without proper tools and techniques.  Second, do not over tighten the two axis clamps.  You need to get a firm clamp but don’t make it as tight as you can get it.  Third, do not attempt to move the telescope by hand once the clamps are engaged.  Once engaged you should only move the telescope using its motors.  Failing to follow this instruction could leave you with stripped gears or other problems.  One final note, be mindful of trapping moisture in and around the telescope when putting it away.  It will happen from time to time that you’ll get condensation on the body and even the corrector.  The best way to get rid of this is to put it somewhere a little warmer and a lot drier (don’t wipe off the dew from the optics, remember rule #1).  Most of this is probably common sense but it will bear repeating as new team members come on board.