Snatching a positive from the jaws of a negative.

Many occultation observations never make it to the analysis stage, as it is clear that the observation is either a negative (miss) or impossible to analyze due to outside effects such as clouds or technical problems.  However, when there are difficulties it often pays to perform an analysis anyway, to make sure that something is not present in the video.  The (268) Adorea observation by Chris Patrick is a perfect example.

(268) Adorea was advertized to the IOTA and RECON observers in Arizona, Nevada, and California.  Three observers were able to observe the event and report results.  The path map is shown here: 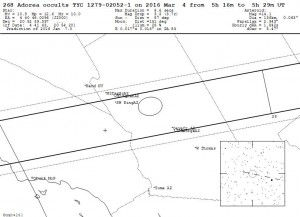 Chris Patrick near Kingman, AZ was the only person to get a positive video observation.  Initially, he was not sure if there was anything on the video, due to the thin clouds that obscured the observation.  Never-the-less, he submitted the video for analysis.

Tony George was able to review the video using both Limovie and R-OTE.  Limovie produced a light curve as shown below: 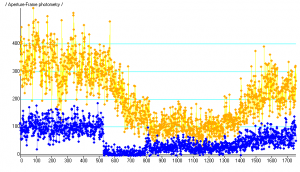 Because the secondary star was not occulted, it can be used as a ‘reference’ star by which the brightness of the target star an be normalized.  The only variation of the brightness of the secondary star is due to dimming caused by passing clouds.  If this dimming is normalized out of the target star light curve we can see if there was an occultation.

Now, there is a clear occultation event.  Analysis showed the event to be nearly 8.9 seconds long, even longer than the maximum duration predicted for the event.  This event, coupled with the two other chords — one positive and one miss — resulted in an estimate of the size and shape of Adorea as follows: 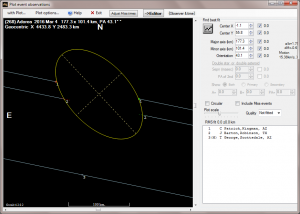 The key to the above result is the hard won observation obtained by Chris Patrick of the RECON team.  Congratulations to Chris for this great observation.

There are many more good events occurring with paths crossing RECON teams in the month of March.  Good luck to all who try these events.