Skip to primary content
With the historic success of New Horizons, the publics interest in Pluto is at an all time high.  Many in the RECON communities have been interested in using their RECON telescope and camera systems to view Pluto.  From my location in Gardnerville Nevada, Pluto has recently been viewable in the low southern skies.  The best times for observing have been around midnight as Pluto rises to it’s highest elevation of around 25 degrees.  At magnitude 14.1 Pluto was easily discernible in the crowded star field of Serpens, if you knew where to look.  You will need an accurate star chart of the star field from the internet or from a planetarium program like GUIDE from the Pluto Project, or similar program.  The annotated image below is a clipped frame from an observation I made on July 16th at just before midnight PDT.  The skies were exceptionally clear and the seeing was very good.  Pluto has now transitioned into Sagittarius and as of July 20th will be just to the NE of mag 3.5, Xi2 Sgr, (TYC 6294 2507 / SAO 187504) at around midnight PDT.  Although Clyde Tombaugh didn’t know where to look for this far off world, you can see Pluto with the help of modern technology.  See if you can find it !! 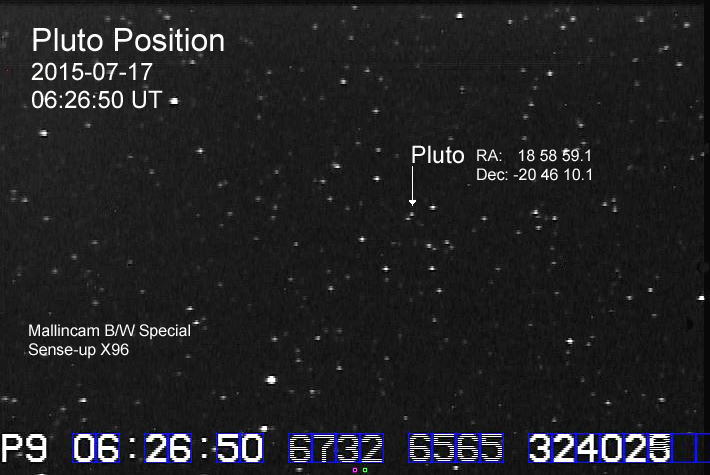