This guide provides an overview for using Limovie to generate light curves from RECON video data.

STEP 2: Open video file you would like to analyze

Limovie has many features for data analysis. To generate a light curve from an occultation event, you do not need to use all of these. The screenshot and descriptions below highlight the key settings that you need to configure to generate a lightcurve: 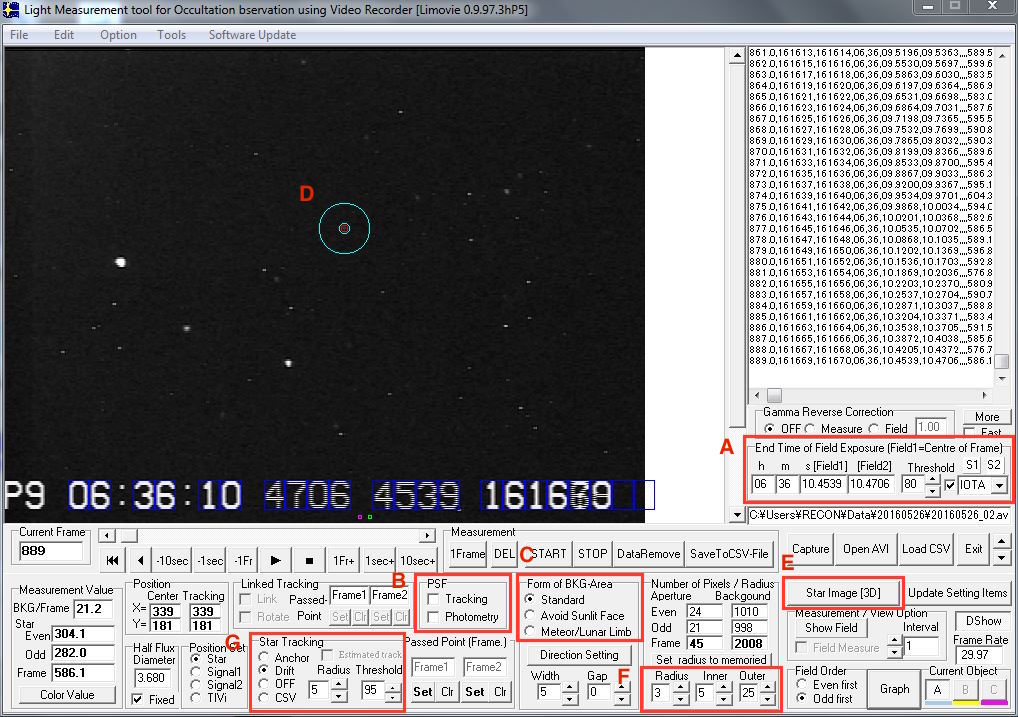 While it is possible to select additional objects, we recommend selecting only the target star to generate your initial light curve. Because RECON telescopes are on altitude-azimuth mounts and many of our videos are longer than 15 minutes, the field of the camera will rotate as the telescope tracks the sky and LiMovie does not currently have a feature to correct for this rotation. By focusing on the target star for the duration of your video, you can determine if there are any sections of the video when the target star brightness changes significantly. You can then focus on these sections of the video using comparison stars to determine if the fluctuation is due to an occultation or another factor such as clouds (see details below).

After adjusting the settings above and selecting the target star that you want to analyze, you can follow the following procedure to generate a light curve for the target object.

The screenshot and descriptions below highlight the three buttons used to generate and save light curve data: 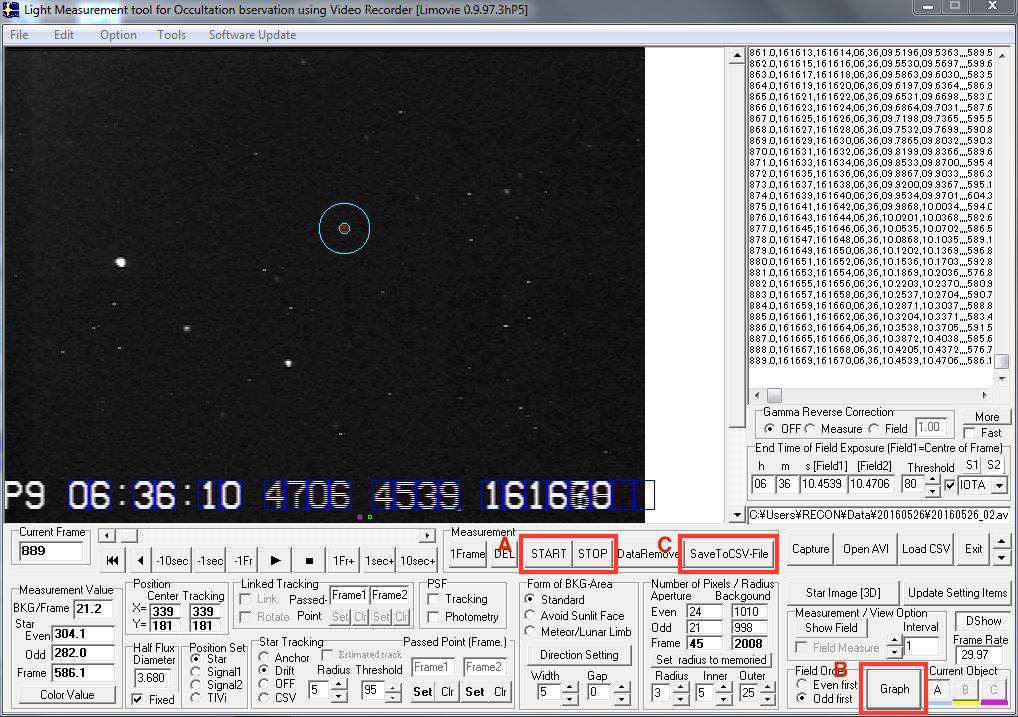 The graphing tool is useful for visualizing your light curve. 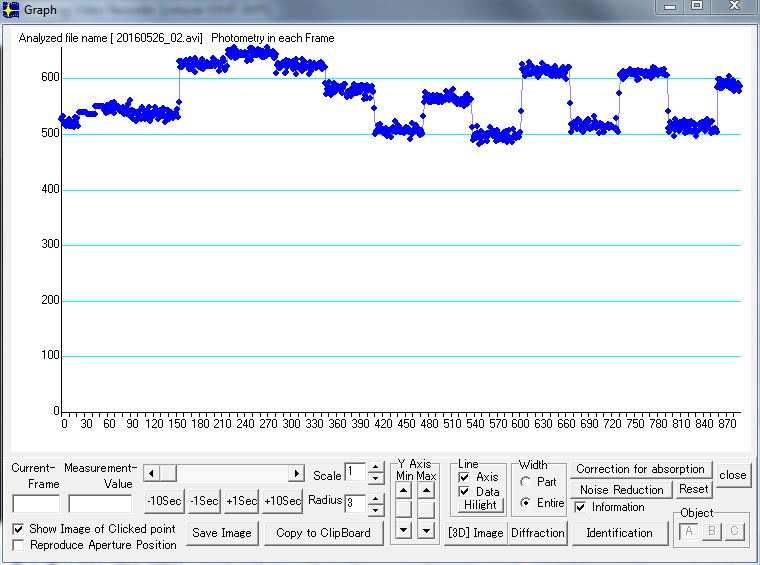 In addition, if you click on any datapoint on the graph, LiMovie will take you to the video frame from which that datapoint was collected. This is useful if you have a sudden intensity drop on your light curve and you want to watch the video to determine if this was due to an occultation or due to the star drifting out of the target aperture. If the latter, you can return to the upper right window of the main LiMovie page and highlight and delete all data entries after the star drifted out of the aperture. You can then re-center the aperture on the target star and continue recording.

You can also select SAVE IMAGE to save a copy of your light curve.

STEP 5: If positive occultation, focus in on event time

If your data shows a positive occultation event, you can now focus on the time before, during, and after the occultation. Because tracking will not work during the time that the star is being occulted, we recommend using a second or third comparison star for tracking. Assuming the event is relatively short, field rotation should not be a problem for this type of tracking. 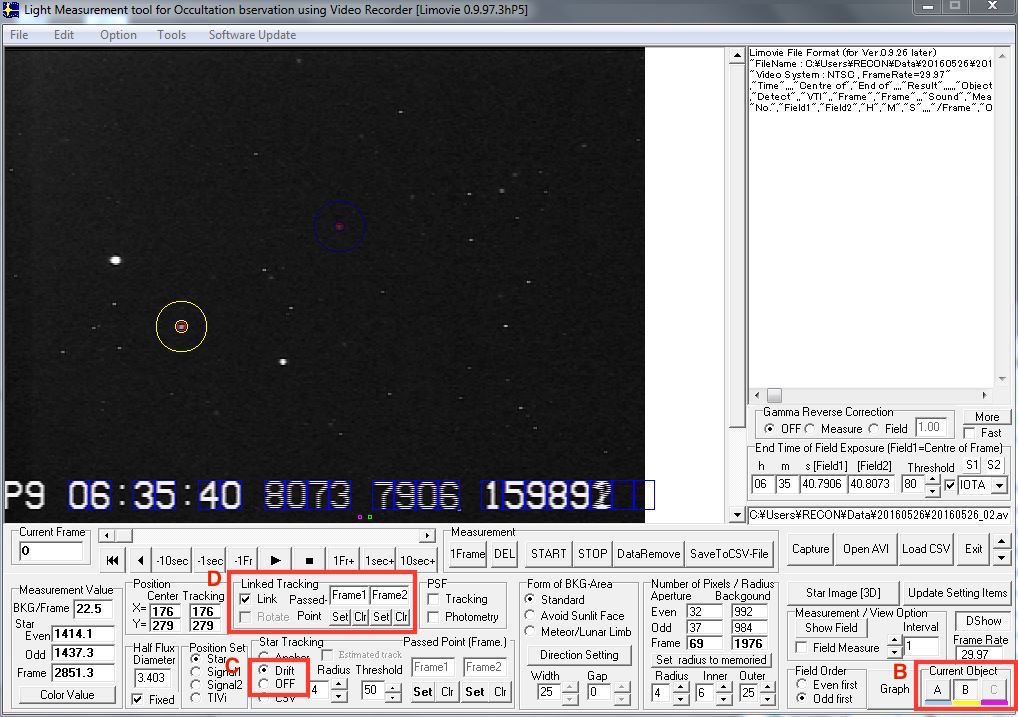 Your light curve analysis is very helpful for characterizing our RECON campaign events. If your students and/or team members are able to generate light curves (showing either a positive or a negative occultation result), we would like collect your light curve analysis. We are interested in collecting the following files, which you can place in the same folder as your raw video files for uploading to SwRI using cwrsync and the following naming conventions: