Thanks to all the moms who are directly and indirectly supporting our collaborative exploration of the Outer Solar System through the RECON Project!!!

After a four month hiatus, the RECON network is swinging back in action this Sunday night/Monday morning with a doubleheader campaign. The first target of the night will be Classical Kuiper Belt Object 99HR11, which is set to occult a magnitude 14 star between 12:50-1:38AM PDT/MST (7:50-8:38 UT). This Classical KBO has a mostly circular orbit and is over 6 billion km (41 AU) from Earth. The object estimated to be between somewhere between 90-220 km in diameter, but RECON hopes to measure this more precisely.

Just under 45 minutes after this first event, our RECON teams will be moving all of their scopes to the east to acquire the star field for Centaur 02GZ32, which will be occulting a magnitude 13 star between 2:22-2:37AM PDT/MST (9:22-9:37 UT). Follow-up predictions indicate that this target will be passing over the southern portion of the RECON network. 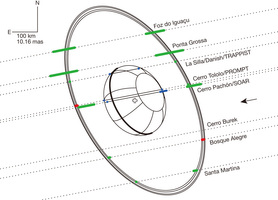 The network is very well positioned to discover whether this Centaur has a ring system. Rings were discovered around a similar-sized Centaur named Chariklo during an occultation campaign back in 2013. Does 02GZ32 also have rings? Does it have any moons? RECON is well positioned to find out!  Even though the central object is predicted to be to the south, the entire network is essential for searching for other material in the vicinity.

For RECON teams, we want to provide the following day-out reminders:

Sky conditions are looking good for most RECON sites except for a handful north of Reno. Check out RECON Sky Conditions for more details. Good luck to all. And again, Happy Mother’s Day!