We’ve had an active RECON campaign season over the past two months, with six full network observation campaigns since October!  We have one more campaign this month involving Resonant KBO 14YJ50 on 10 February at 04:01UT.  Thanks to all of our team members for your dedication and perseverance!

We are also looking forward to our upcoming 2019 RECON Team Meeting to be held at Lake Mead National Recreation Area near Boulder City, Nevada.  We will be holding an Orientation Training Session for newer team members starting Thursday February 28.  Veteran team members will join for the full team meeting Friday through Sunday, March 1-3.  We ask that team representatives register by Monday, February 4. 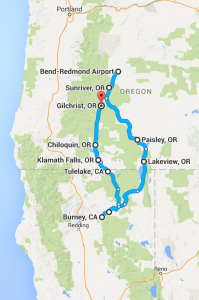 Around the time of our last RECON campaign event, I had the opportunity to make a four-day road trip through our Southern Oregon and Northern California RECON sites. The map provided here highlights stops along the way. I landed at the Bend-Redmond Airport on Sunday, January 17. That evening, team members from Redmond, Bend, Sisters, Gilchrist, Sun River, and even White Swan all met at the Oregon Observatory. Despite the fact that it was snowing outside, it was a very productive opportunity to reconnect and talk through issues regarding RECON equipment and procedures, including our new procedure to take sky flats and dark field videos during future events.

The next day, I headed to Paisley, where I was joined by team members from Christmas Valley, Paisley, Lakeview, and Klamath Falls. Again, clouds kept us from practicing for Tuesday’s event, but it was useful for everyone to ask questions about equipment and alignment procedures.

Tuesday morning, I presented to middle school science students in Lakeview, and then I headed down to Fall River and Burney, California. That night, during the event involving 03WL7, the skies cleared around sunset allowing for a successful observation session with new team members from Burney. Sadly, most of the rest of the Western United States was clouded out that evening, and only four of our 55 telescopes sites had clear skies!

After presenting to students in Burney on Wednesday morning, I stopped in on team members in Tulelake and Chiloquin. Marc and I had not made it to Chiloquin during our recruitment trips during Fall 2014, so it was great to visit this community. 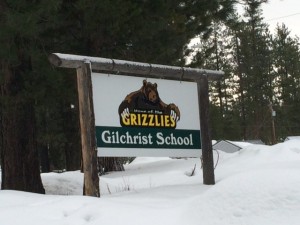 Wednesday evening, I met with three team members in Klamath Falls The next day, I headed up to Gilchrist, the home of the Grizzlies, where I met with students that morning. This was the final RECON site that I had not yet had a chance to visit. In meeting with the students there, we had a great time discussing the RECON project and ways that students could be involved.

I wanted to thank the roughly 50 team members from 13 RECON communities who came out to meet with me during this trip. I am truly honored to work with such a great group of dedicated, flexible, and fun individuals!

At a very civilized hour Friday evening November 1, 2013, the asteroid (128) Nemesis is predicted to occult 2UCAC 30123334 (Sat. 2 Nov. 4:01 UT).  In Plumas County (Quincy, Greenville, and Portola) we are planning to use it as a warm-up for Iduna a week later.  We are near the southern edge pf the predicted shadow path so this event also presents an opportunity for the RECON communities to our north. 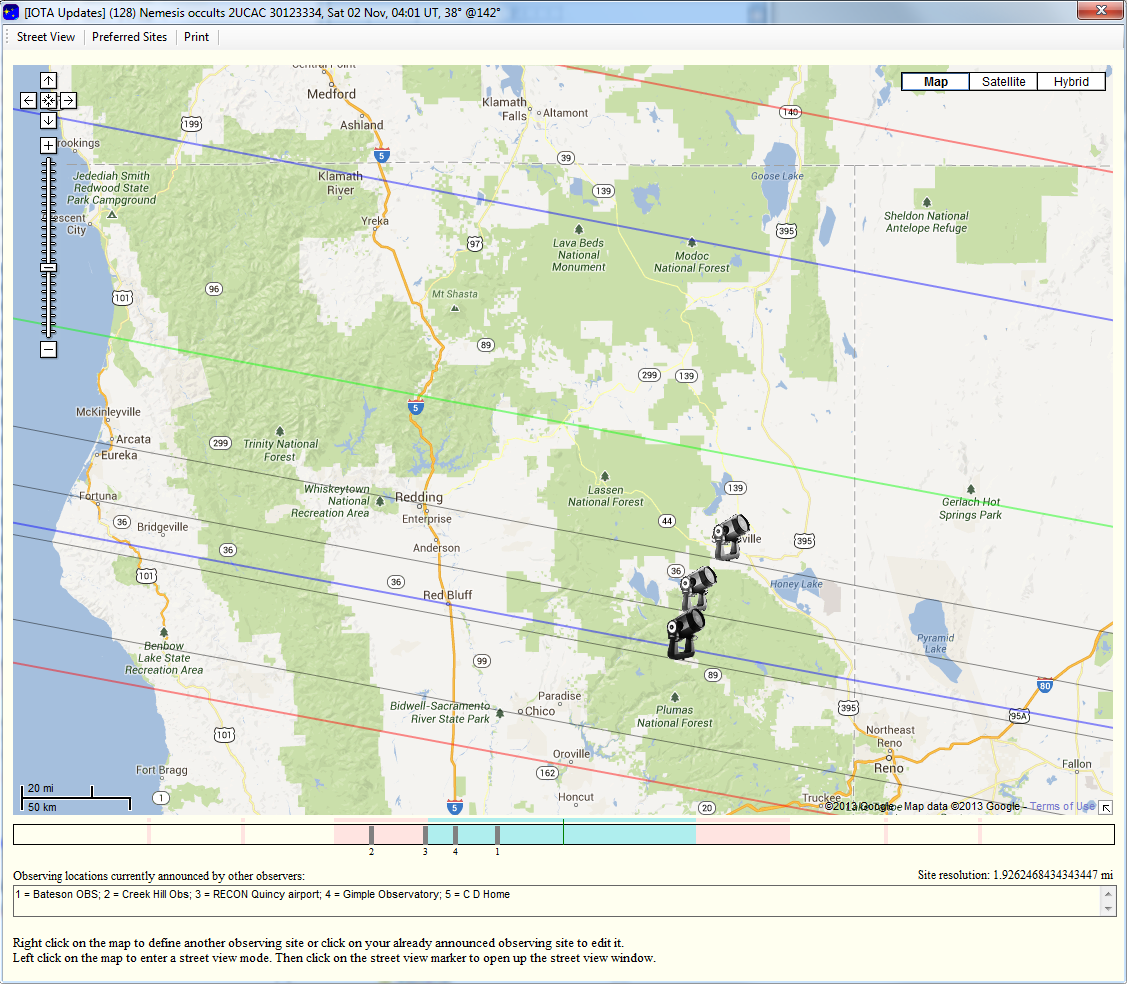 The magnitude of the star is actually less than that of the asteroid so the light curve will be shallow.  Full details of the occultation are online at
www.asteroidoccultation.com/2013_11/1102_128_30282.htm
The field is mildly challenging because it is relatively sparse and faint. 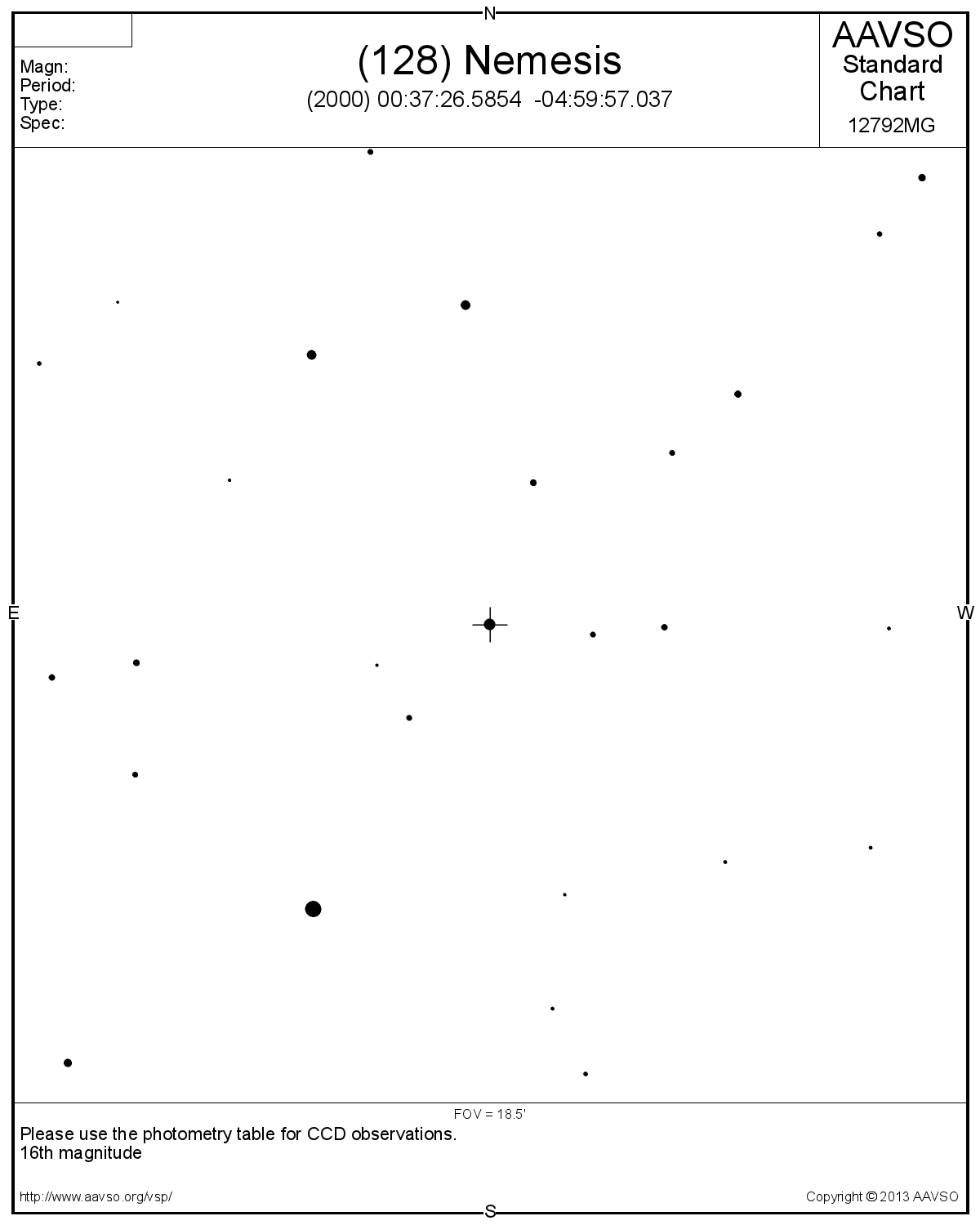 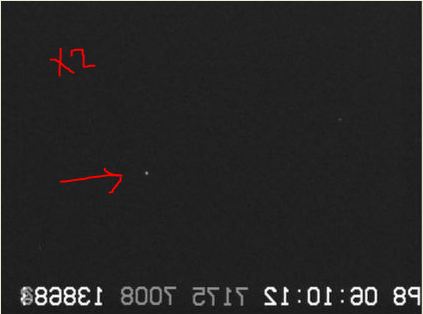 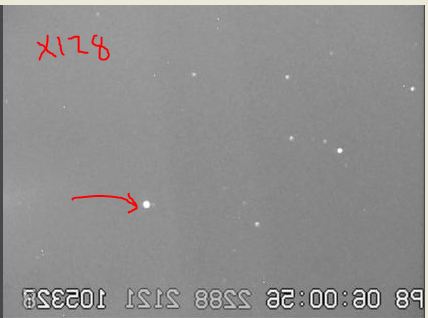 A subset of the RECON network self-organized last week to measure an occultation by (2258) Viipuri the night of Friday, August 2 (August 3 UT).  Observers in Susanville, Greenville, Quincy, Portola, Carson City, and Gardnerville all participated.

Starting at 04:52:07UT, Buck Bateson in Susanville was ecstatic to see the target star drop in brightness for under 5 seconds. Below is a preliminary lightcurve that Jim Bean has generated from the Susanville data.

At the same time, Jim and others recorded anomalous but less conclusive data from a location roughly four miles south of Portola.  Meanwhile, approximately 40 seconds prior to this, Jerry Bardecker in Gardnerville measured a half second drop in intensity for the target star.

Before making a conclusive interpretation, we plan to take more time to reanalyze the data from all of the sites that contributed to this campaign.  However, it appears that Susanville and (possibly) Portola recorded main body of asteroid while Gardnerville may have recorded a smaller object orbiting along with Viipuri.

Thanks to all who have contributed to this campaign!  More to come!!! 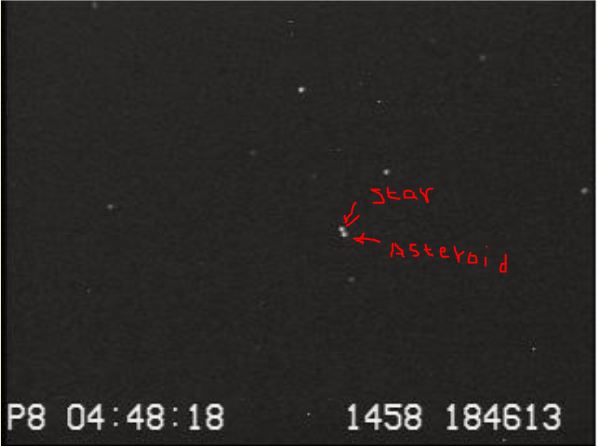 On the heals of our Mikhailov event, we are hoping for better weather this evening from Reno down to Bishop!  The event is just after 10PM Pacific Time on Wednesday, July 15.

For more details, visit the Phocaea event on our observation campaign page.

This month, the RECON network will be observing three different occultation events involving Main Belt Asteroids.  Because we know the orbits of these objects better than TNOs, the predicted uncertainties for the shadow paths are lower.  While all in the network are welcome and encouraged to participate and practice on all three events, we are specifically asking smaller subsets of the network to record data so that we can demonstrate the ability of the RECON to detect three occultation events this month.  Events are summarized below along with links to the information page for each:

Please don’t hesitate to post questions and thoughts on this blog using the “Leave a reply” link below or by going to the individual event pages linked above!

We have posted details for workshop attendees under Participant Resources