The 2017-18 academic year started off strong with our Annual RECON Team Meeting in Sunriver Oregon in late October and an occultation event in November involving Centaur 01SQ73. However, since then we have not had any high probability TNO occultation events to pursue as a network.  We wanted to briefly explain why and share what we have been working on to address this. 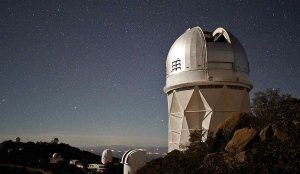 Up through January 2016, RECON Principal Investigator Marc Buie had successfully competed for routine use of the Mayall 4-meter Telescope at Kitt Peak National Observatory to monitor the positions and orbits for TNOs that feed into our RECON occultation prediction system. However, the Mayall Telescope has been undergoing a significant mission reconfiguration over the past two years to focus on the 3-D structure of the universe to investigate dark energy.

While this involves cool science, the downside has been that the facility is no longer available to RECON and other projects previously using the telescope facility. With the resulting loss of telescope time for monitoring TNO positions, we have seen a significant drop in our ability to predict high-probability TNO occultation opportunities this year.  Hence, no official, full-network RECON campaigns since November. 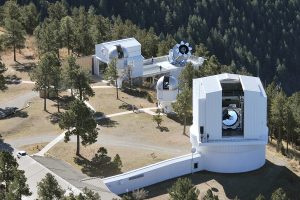 To address this, Marc Buie and Rodrigo Leiva at SWRI and John Keller (now at Fiske Planetarium at the University of Colorado Boulder) have been working over the past several months to obtain observing time on other telescopes to collect more positional data for our TNO prediction system. Toward that end, RECON was recently awarded 4 half-nights with the 3.5-meter telescope at Apache Point Observatory in New Mexico. Weather permitting, we hope to measure as many as 70 TNOs in April and May with this facility. 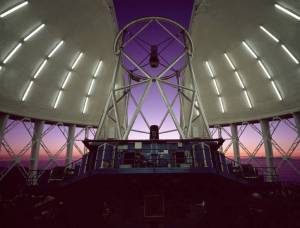 We have also obtained 4 hours for a pilot program with the Gemini North 8-m Telescope located in Hawaii. With this telescope, we expect to observe 5-6 TNOs, focusing on much fainter objects.

During the middle of March, we observed the first three objects of this Gemini study and analyses are on the way. Shown below is a stacked image of one of these objects taken at three different times during the night.  The white objects are stars, while the red, green, and blue dots are the the same object changing positions with each exposure, a TNO moving relative to the background stars! 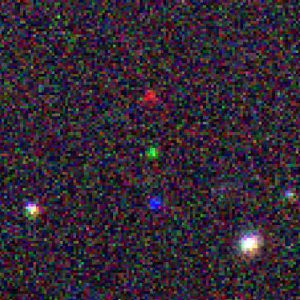 We also have monthly time allocated on the 4.3-meter Discovery Channel Telescope (DCT) at Lowell Observatory in Flagstaff, Arizona, and another proposal was recently submitted to observe more than a 100 TNOs with our Canadian colleagues at the 3.6-m Canada France Hawaii Telescope (CFHT) telescope. 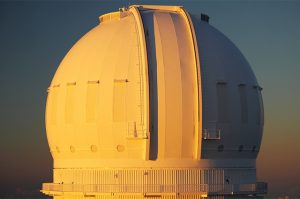 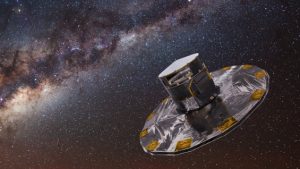 Another important development coming up in less than a month is the second data release of the Gaia mission headed by the European Space Agency on April 25. This catalogue will provide ultra-high precision position and proper motion information for over 1.3 billion stars.

Because occultation predictions depend on known positions of both the target star and occulting object, both the Gaia dataset and our TNO monitoring efforts described above should get us back on track to our proposed cadence of 6-8 occultation campaigns per year by the start of the next school year.

So what should RECON teams expect before the start of summer? There are currently five potential TNO campaigns in our prediction system on the following four dates before the end of the school year (5/10, 5/24, 5/25, 6/8, all UT dates). Clear skies permitting, we plan to measure the positions of all five of these objects on April 16-17 from Apache Point Observatory (along with an additional 60ish objects). We will use this data and the Gaia dataset to update our prediction system by the end of April, and we will let our RECON teams know by early May if any of these five become high probability events that we would like to pursue. This is a classic example of how additional and higher quality data can used to obtain better predictions to drive further science. 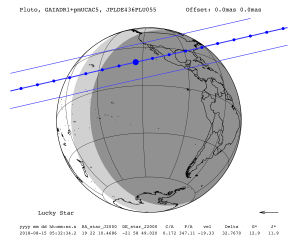 Finally, looking ahead to the summer, it is also very likely that RECON will participate in an important occultation opportunity involving Pluto. This event will occur on August 15 around 05:32 UT, and RECON is very well positioned to provide valuable data during this event. Additional information on this and other TNO and Centaur predictions is available on the ERC Lucky Star Project prediction page.

Rodrigo and John are planning to blog from the Apache Point Observatory the nights of April 17 and April 18. We will keep you posted on how this observing run goes and the resulting impact on future TNO predictions.  Stay tuned!!