This is a very exciting campaign for RECON teams from Klamath Falls, Oregon down to Yuma, California. (9142) Rhesus is a Trojan Asteroid located in the L5 Lagrange point that trails 60 degrees behind Jupiter. The uncertainties are very low for this prediction, making this a very strong occultation opportunity. The shadow track is shown below. If you are within the range of the shadow track, make sure to sign up!

As many RECON team members have noticed, the frequency of occultation campaigns drops off during the summer months.

Interestingly, the reason for this has to do with the orientation of our Milky Way Galaxy and the plane of our solar system (known as the ecliptic), as well as the tilt of Earth’s axis. During the summer, daytime is longer but nighttime is shorter, and while the Sun is high in the northern sky, the ecliptic is low in the night sky. In addition, the ecliptic crosses through the center of our galaxy in the constellation Sagittarius, which is up in the night sky the longest during the summer. Because it is difficult to discover trans-Neptunian objects within the crowded star field of our galaxy, as well as their low positions in the sky and shorter nights, there are fewer high probability events that we can pursue during the summer.

As we approach the start of the new school year, however, conditions become more favorable for RECON campaign events. Toward this end, we have already announced two upcoming events on the night of August 16-17 involving Centaur 08YB3 and the night of September 3-4 involving Centaur 13NL24. In addition, looking at the RECON Campaign Prediction Page, there are eight additional campaign opportunities before the New Year with probabilities greater than ~20% that we are currently considering as full network campaigns. The 2019-20 academic year promises to be the most productive occultation cycle of our project to date!

Despite being a slow occultation season, this summer has been exciting on several other fronts. We have been working on four publications related to positive TNO occultation campaigns during the last academic year. The project also continued to collect data from Apache Point Observatory, the Discovery Channel Telescope, and Canada France Hawaii Telescope to augment our occultation prediction system. And in June, we submitted a proposal to the NASA Solar System Observations Program for RECON 2.0. Informed significantly by our RECON science team meeting discussion back in March, RECON 2.0 will both upgrade and significantly enhance the efficiency and productivity of our citizen science project into the 2020s.

Our campaign tonight, August 14th, involves Pluto, a dwarf planet with an atmosphere. The nature of the experiment is a bit different from what RECON is mainly designed for.

Rodrigo Leiva, a RECON Postdoctoral researcher at Southwest Research Institute has explained the science of this Occultation:

For an opaque object, a positive detection will look like a sudden dimming of the star, followed by a sudden back-to-normal brightness. If you put an atmosphere around an object, then part of the light is refracted away from us by the atmosphere (because its refraction index is different than 1), and some light is also refracted toward us.

If an observer is close to the central line, the atmosphere acts as a magnifying glass and the refracted light is concentrated. This is called the central flash. For a brief time, the star will look even brighter than when not occulted, i.e. you see a ‘flash’. The central flash allows us to study the lower atmosphere of Pluto, a few kilometers above the surface.

Is Pluto’s atmosphere finally collapsing? Did you know that the atmosphere has been expanding and this could be the first time we detect a change in that trend?

Our role is to give a correct interpretation of the central flash. It is necessary to know where the central line is very precisely – down to single kilometers. This is possible if we have a good sampling for the whole atmosphere. And we have the right network for that, RECON! According to the prediction, we could sample a big portion of the north half of the occultation, which will give a good constraint for the atmosphere modeling and also in determining if the atmosphere is finally contracting.

It is possible that some stations will detect gravity waves, small variations of density in the atmosphere. These waves are visible as short changes in brightness in the light curve during the occultation. It is a very exciting experiment!

Here is the sky coverage map for around 2AM EDT. 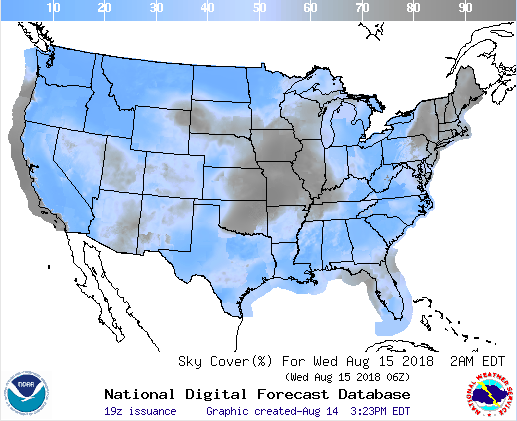 Good luck to everyone! Go RECON!